Ordering Icons has me thinking about super-heroes and on the walk from the car to work, I thought of the Globe City Ireggulars: 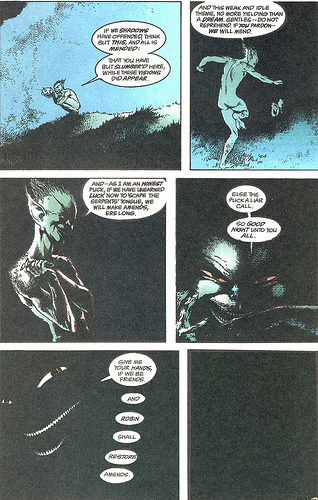 I am that merry wanderer of the night.’? I am that giggling – dangerous – totally – bloody – psychotic – menace – to – life-and-limb, more like it.

Other villains and guest stars?

What would the arcs (trade paperbacks) be called?

Notice, I tried to stick to characters who survived their plays and it was really hard not to break that rule for Mercutio by taking Jim’s suggestion that he faked his death (“Everyone was doing it!”).

EDIT: This post and the discussions below have inspired me to get in touch with a great college professor, Prof. Harris.  I wrote a paper for his Shakespeare and  Theory class called, “Its a bird! Its a plane! Its…Shakespeare-man!”  That class was amazing.

60 thoughts on “The Globe City Ireggulars”