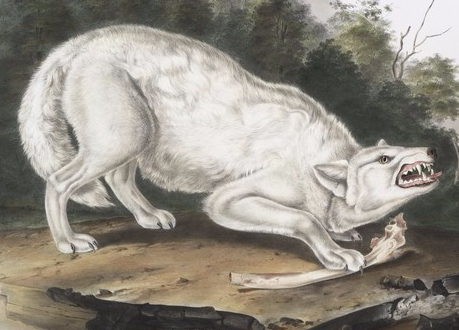 When humans communicate and bind post-life entities they speak in what sounds like hushed tones in order to reach those sub-vocal ranges. Wolves have adapted to post-life plasmic predators by utilizing their howl. A pack will spread out in the area around the entity. The wolves will then howl to not only communicate with their pack-mates but begin changing the frequency of the howl to bind the entity to the pack’s will.

When the howling’s purpose changes one can hear as the sound quality becomes something that can cause vibrations in plasmic energy sources. Spirit Wardens attempted to breed wolves with hunting hounds, hoping to utilize this method but the experiment was a failure. Why this breeding program failed has been hotly debated but it could have something to do with the wide territory needed for a pack to successfully hunt or it could be something else about the physical changes that come with domesticity that biological sciences do not yet comprehend.

Having a plasmic post-life entity howl-bound to their will changes the pack dramatically. 3 of 4 such packs turn cannibal. Often, a member of the pack’s fur will turn white. In every case, the howl-binders will become more aggressive, taking down healthy armed humans with shocking regularity. In the period of about a month, the plasm will become used up and the pack will hunt down and bind another.

Humans who have been bitten by such packs and survive often get a disease that, at risk of sounding like a dime novel, we will call lycanthropy. Once inflicted with lycanthropy, the victim’s voice begins to vibrate plasmic energies, causing them to be misunderstood by their peers. If the disease is left untreated, the diseased will enter a quasi-living state, hovering between flesh and plasmic entities. Eventually, the patient will cease to be a living human taking on both plasmic and wolf-like qualities, becoming a new species, lupus plasmid.