My favorite moment from last night’s Trophy Gold game or maybe just the moment that is lingering with me this afternoon as that session had plenty of amazing moments.

The group decided to walk into the Ghoul King’s Fort posing as emissaries from the queen. Aram, a disgraced courtesan,  knows court and  the queen. It was all very Star Warsy, putting on Stormtrooper armor and walking around the Death Stars with Chewie.

The fort was an ancient ruin in the middle of a lake; not many visitors. The guard went to tell the king. Near the gate was an altar, a place where people who are waiting could pray. The most prominent deity was the World-Eater, a kind of rough cylinder with a lamprey mouth, a vampire god the ghouls worship. On the altar are icons the locals put there, dragon-gods are the local pantheon so there’s the Five-Headed Empress and the Platinum Emperor.

There was some tension – would this ruse work? A good time to ask some questions.

What deities do your characters honor?

Aram stole the icon of the Platinum Emperor.

Esfa put an icon of a raven, the death deity he honors.

Revel remembered having to dress as gods and saints for gladiator fights during festival days. He remembered that the World-Eater helmet was uncomfortable. 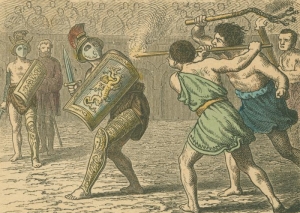 Rasei, played by Jesse, wasn’t sure.

“Is there a trickster thief god?” he asked.

“Yes, the saint of thieves,” I said because putting the word saint with words I don’t associate with saint always pleases me. Saint of Axes, Saint of Ghouls, The Wizard-Saint, etc.

“Saint Hastad of the Pockets!” Anthony said with gusto, joining in.

“Also known as Old Hundred Hands,” I added, writing down, St. Hastad of the Pockets in my notebook.

And Jesse told us about how Hastad’s icon wasn’t put on the altar directly. Thieves hid the icon nearby. Rasei looked around the altar for the icon of St. Hastad and found it in the World-Eater’s mouth with blood on it.

Rasei cleaned it off and hid it under the altar.

Later that session Rasei was sneaking around the fort and knew he was being followed. It was a ghoul guard. Rasei ambushed him, killed him with his spear, driving him into an alcove. There on the window sill was an icon of St. Hastad.

Ask questions and use the answers. Encourage everyone at the table to join in.

We’re up to $94 for Paid for in Blood, my Trophy Gold Treasure Mini-Supplement. Can we hit $100 today?

May your preferred saints watch over your endeavors.