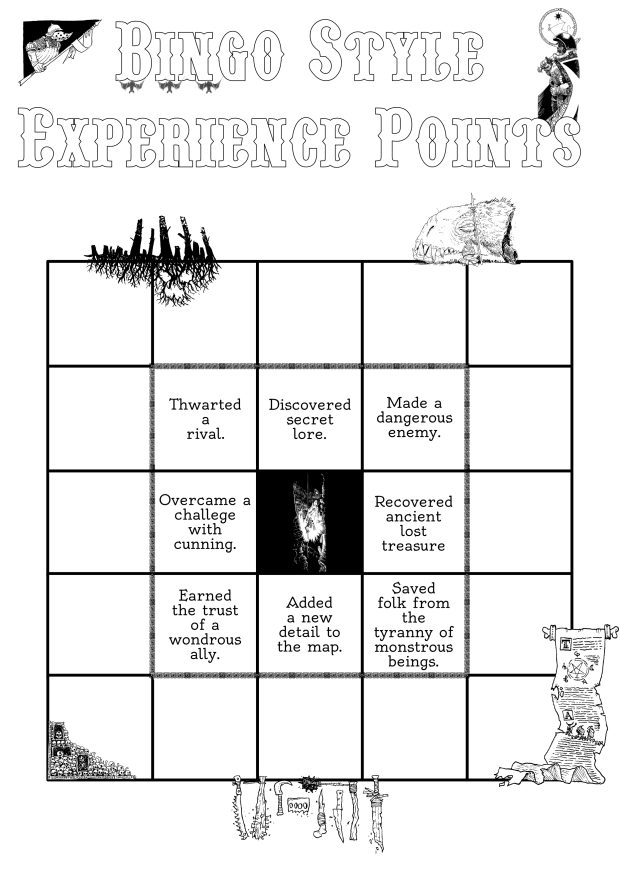 We’ve been using the Bingo Style Experience Points (LINK TO FIRST POST) for a few months now. The last character just hit 3rd level. The way we’ve done it is when we hit a bingo-row/column/diagonal the group gets a level to hand out to whichever character they decide. I can see different ways to do this.

I like the table deciding where each level goes. I haven’t seen it create bad feelings but I could see how it might if there are other problems afoot at the table. It might even create problems, which is the last thing I want.

I realize that asymmetric level advancement vexes some folks. They might very well be right and if so, I’ll move things around. For now, I dig it and it stays. If anything, I might lean into that a bit, see how far we can go before the game breaks.

I think I am going to have the levels be able to go to other things – leveling up hirelings, pets and maybe an HQ. Something to consider for later…

The group makes the decision about who gets the level for reasons both narrative and strategic. Sometimes it is, “Level up the cleric and the wizard first,” thinking about artillery and healing and sometimes the conversation goes, “Helewyn clearly just learned something; she should get the level tonight…” and the level is doled out because it makes narrative sense. Other times it is pragmatic, “Is anyone still 2nd level?” I like this blend.

Sometimes we keep track of things as they happen. Other times we go over it after a scene or at a good resting spot. Some sessions folks tinker with it during a break. There have been days we’ve forgotten about it and gone back to it at the end of the session. It can be as intrusive or background as you want and still work.

I use the jamboard where we keep it as a place to store NPC names, maps and art. Players use it as a spot for character art.

Alright, everyone gets a level every time you get a row. Maybe there is a way to write the bingo squares so they are not so easy to reach. If we did it that way the party would be 20th level rather than 3rd.

Maybe add another layer of squares? Otherwise it would go too fast. Maybe only one level per session? I don’t think we hit a level every session but sometimes we hit more than one or two right at the same time. Something to work on and consider.

We’d have to figure out a different time if we played a strange rule-breaking game in which a group of 1st level characters dump all of the levels into one character, who is said to be their demi-god.

I know. I want to do it anyway. It is just so strange to have a party trying to elevate one character to godhood.

I’m figuring out how to put to words what makes for a good bingo square.

Both could be literal or metaphorical and it gets us to watch out for play in which these things happen. I don’t have proof but I feel like this style of experience encourages players to pay attention, looking for their friends to do cool things.

Then there simple and literal ones that gets everyone looking for opportunities:

Spring a trap on a mighty foe

Use a mundane item as a weapon

And sometimes going into a particular mission inspires one. When the players were going to a Faery Ball we had:

Ask someone dangerous to dance

In the week before we play, if we’ve just cleared the board, we have a thread where we share ideas. Before we start I make sure no one had an idea that isn’t represented. I add some in too. Sometimes I use what I know of the upcoming adventure but often I have no idea how the group is going to attack a problem. I never know if they are going to use dynamite or diplomacy (and I wouldn’t have it any other way).

Last house-rule we use now – A bingo chip can be spent off the board as Inspiration. I choose the chip. I wouldn’t necessarily want players spending a chip on a square they were accomplishing with that roll. I’d want the chip to mean some kind of sacrifice.

If we hit the same bingo square twice, could we put two chips on that square and use one for Inspiration while still having a chip on that square? Something to consider…

If you use the Bingo XP Variant, please let me know. I’d love to hear the glories and challenges you experience with it at the table.

Thank you to the Thursday night crew that has been gaming regularly since the first days of the pandemic. And thanks to Aaron for talking D&D with me.